Ya know, it seems like folks are oftentimes just looking for a reason to be offended.
Just waiting for someone to do something to set them off.
And on the reverse token, a person that has truly offended someone by a bad attitude,
unkind words, bad business dealings, rude behavior, etc, they turn it around
to blame anyone else but themselves.
They justify it & make everyone else the bad guy, never taking personal responsibility
or righting their wrongs.

To this I say, take a look at yourself & your actions.
You know when you're acting in a way that's ugly & unbecoming.
Instead of being one who's easily offended, try giving someone the benefit of the doubt.
Try realizing there may be more going on than you realize.
Try not thinking about yourself all the time.
Half the time, the things that you conjure up in your head aren't even true anyway.


And how about the power of an apology.
Saying 'I was wrong.  I was out of line. I messed up.'
There's such freedom in owning your mistakes & asking for forgiveness from those you've wronged.
It takes a much stronger person to apologize than one who always justifies
& never learns from their own bad behavior.

I've used this phrase so many times in the last couple years,
& if you've been around me much at all, you've heard me say it
{I've even heard some of my friends using it which makes me happy ...
makes me realize you are getting the concept}:
I GIVE A LOT OF GRACE CAUSE I NEED A LOT OF GRACE.

I know there have been times that I have spoken quickly & wish I hadn't.
I've forgotten things that are important to people.
I've made a decision that may have hurt someone & I may have not even known.
There've been times when I've been tired & not on my game.
My frustrations may shown through.
And for ALL these times that people have given me grace, dealt with me in a understanding manner,
& overlooked my shortcomings, I am so grateful.
Hurting anyone intentionally would never be my aim.

So, I encourage you today ... go the extra mile.
Be kind.
Give people the benefit of the doubt.
Say sorry.
Forgive easily.
Love one another.
Be in each others corner.
Be a friend.
Act like Christ.

Monday          C.R.A.F.T      The Dedicated House  I Should Be Mopping the Floor
Between Naps on the Porch  The Modest Mom
Tuesday     A Delightsome Life   A Bowl Full of Lemons    Titus Tuesday      A Stroll Through Life
Wednesday   Raising Homemakers        Savvy Southern Style         Adorned From Above
The Thrifty Home   A Wise Woman Builds Her Home
Thursday    Between Naps on the Porch   Serving Joyfully     Lamberts Lately
Friday      Rooted in Thyme  The Thrifty Groove   Farm Blog Hop  Best of the Nest
French Country Cottage  The Girl Creative
Sunday    Nifty Thrifty Things    Suburbsmama    Sew Many Ways
Posted by Angela ~ Call Her Blessed at 9:34 AM 1 comment:

Wait on the Lord 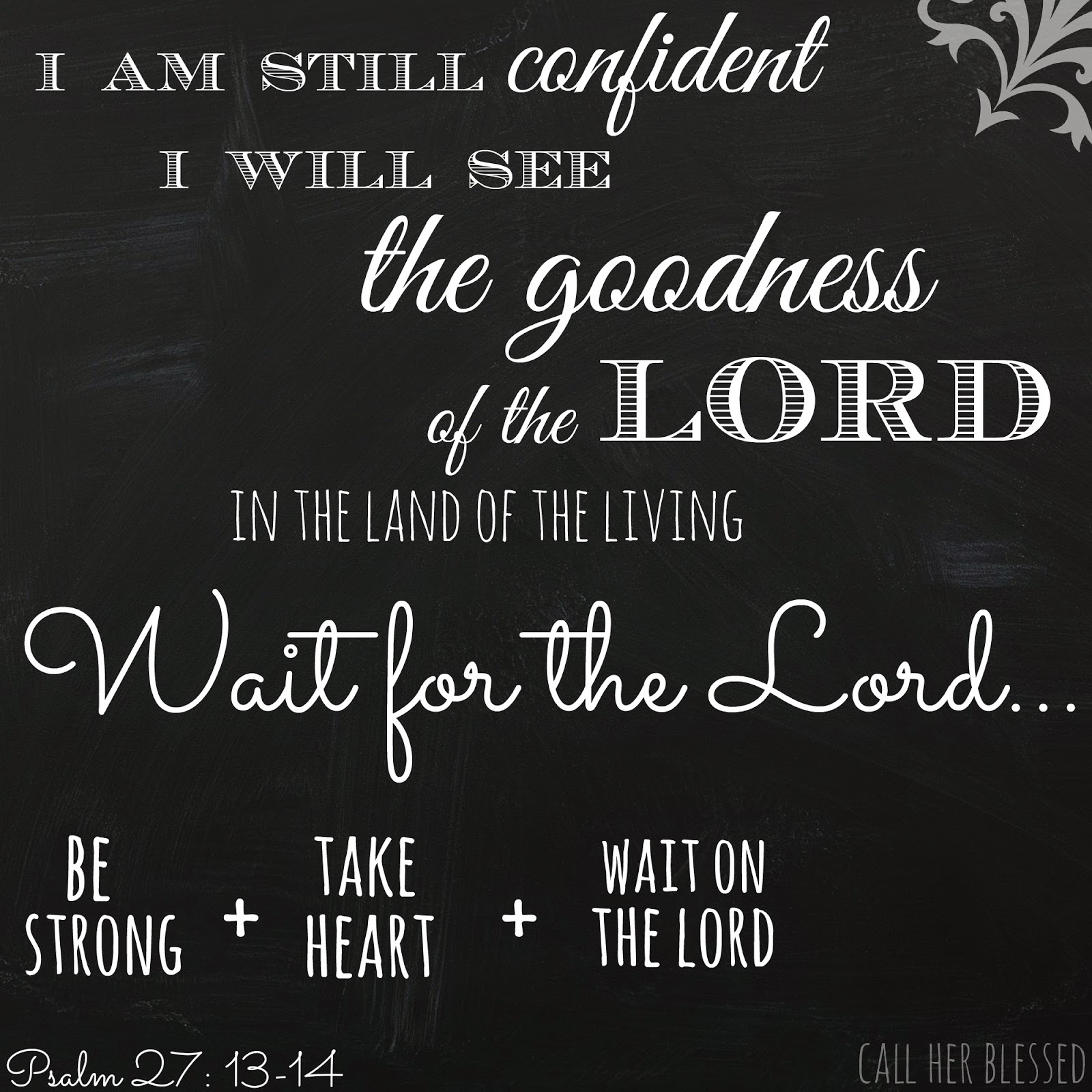 Email ThisBlogThis!Share to TwitterShare to FacebookShare to Pinterest
Labels: Encouragement

I first heard of Grape Salad several years ago when my sister said a friend of hers
was going to make it for an event.
I thought to myself, 'grape salad'?
What in the world could that consist of?
Grapes aren't the most common ingredient, after all.
Well, unless you are making grape jelly, of course. 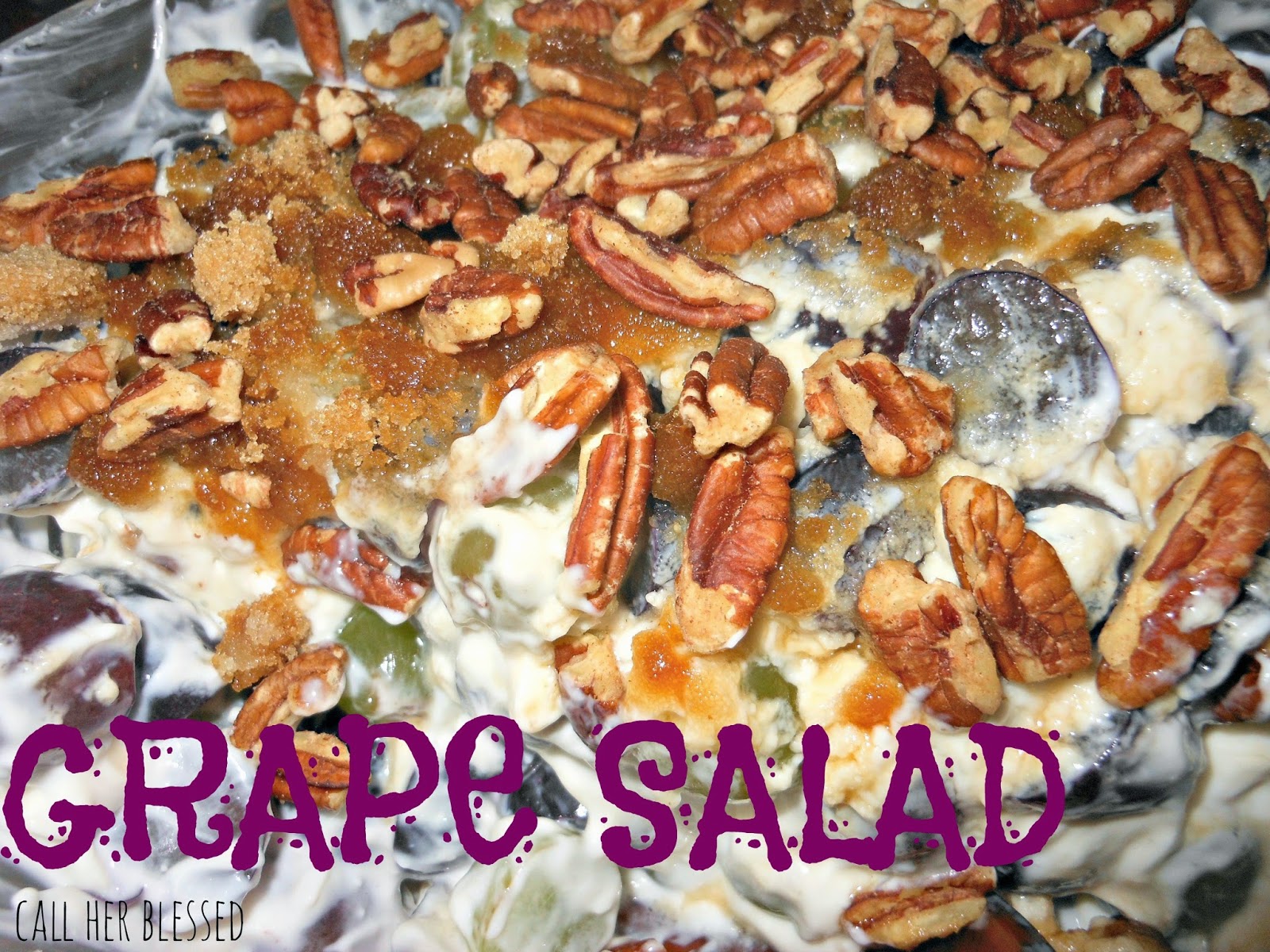 I never thought about grape salad again until several years later when I saw a recipe for it
& decided that I'd give it a try.
Honestly, I was just ok with it.
I'm not sure why, but I just wasn't overly impressed.
The other day, however, I bought too many grapes {& too much other fruit}
& they just weren't being eaten.
I couldn't allow them to go to waste.
So, you guessed it ... I pulled out the ol' Grape Salad recipe & gave it another go around.
This time, it was amazing ... & was devoured quickly!

I have no idea what the difference was from last time til now
{I followed the same recipe},
but we absolutely loved it.
I snapped a couple pics & knew I'd have to share it with all of you. 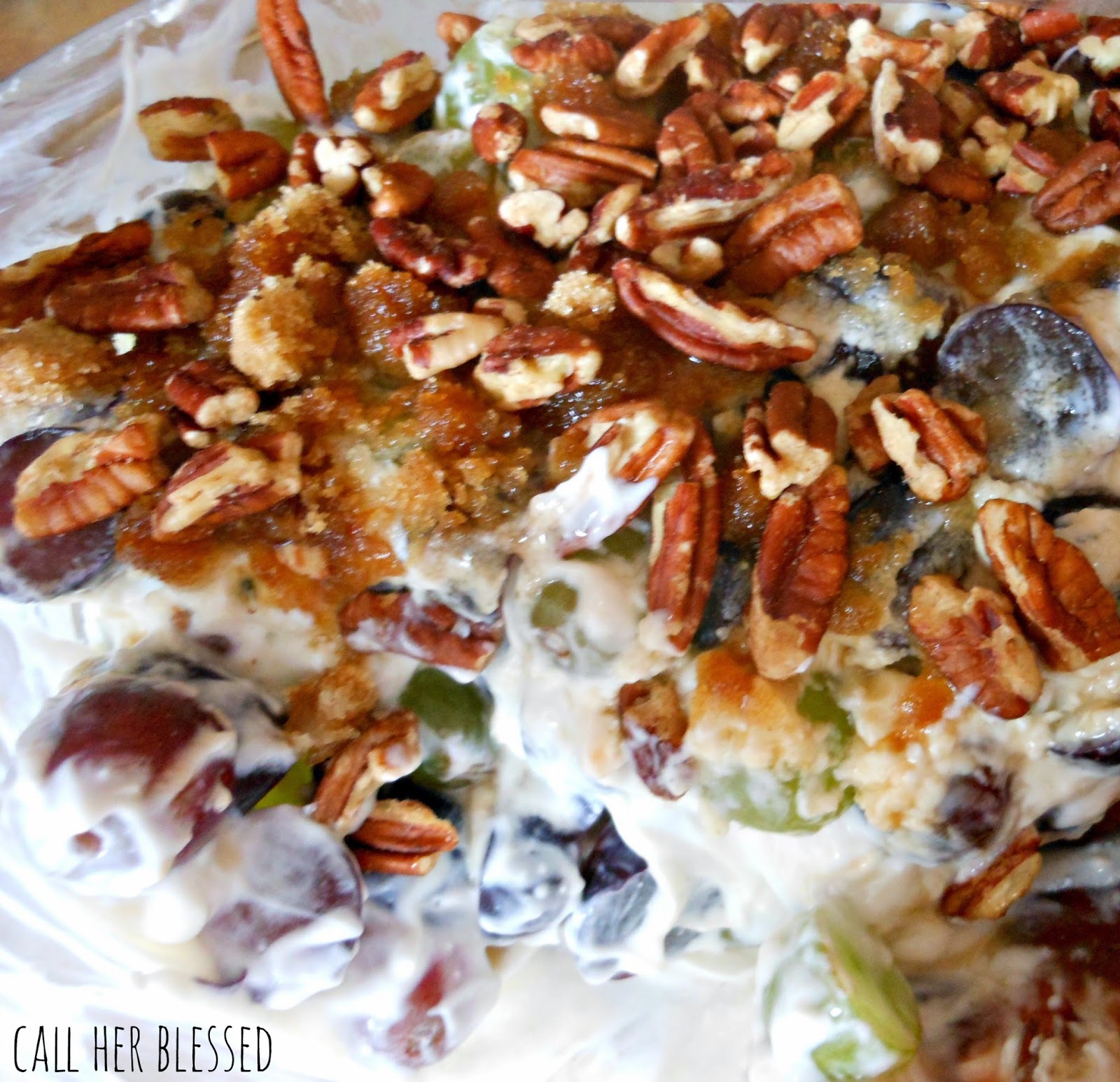 This is one of those super quick & easy recipes.
In fact, halving the grapes is what takes the most time.

Grape Salad
Topping
Remove stems from grapes, rinse & cut in half.
Beat sour cream, cream cheese, granulated sugar and vanilla with a mixer.
Stir grapes & 1/2 cup of pecans into the mixture and place in a serving dish.
Combine topping ingredients and sprinkle over top.
Refrigerate for at least one hour before serving.

I like to use fat free sour cream & low fat cream cheese & it greatly reduces the calories,
making this a pretty figure-friendly dessert.
That's always a bonus. 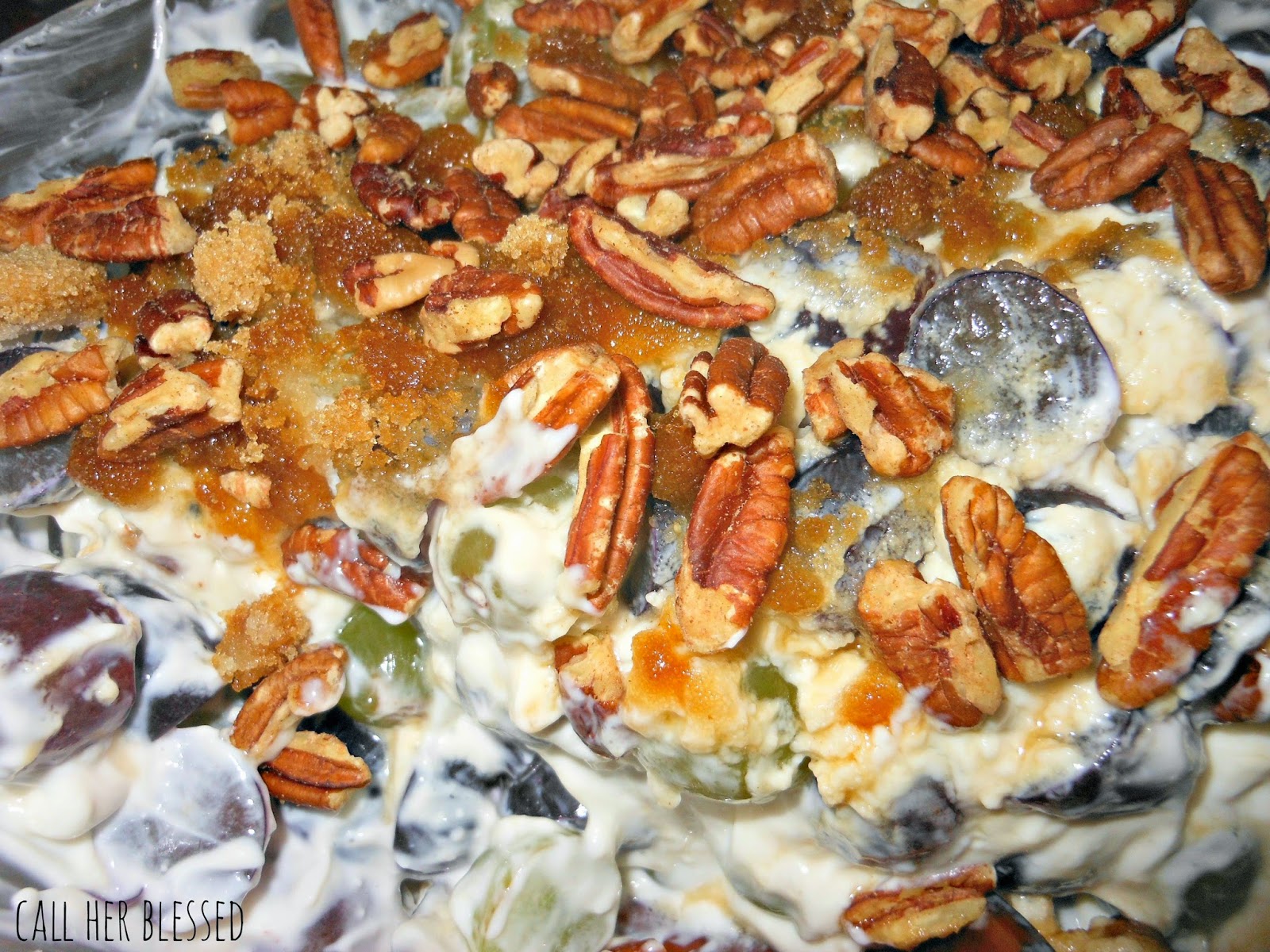 It's been pretty hot around here for days & this made the perfect, refreshing summer dessert.
If you are in the mood for something a little different, I hope you'll give this one a try ...
& I hope you'll like it the first time around ;)
As always, blessings & thanks for stopping by.

Who doesn't love a good party?!
You can find me here linking up with these great blogs.
Monday          C.R.A.F.T      The Dedicated House  I Should Be Mopping the Floor
Between Naps on the Porch  The Modest Mom
Tuesday     A Delightsome Life   A Bowl Full of Lemons    Titus Tuesday      A Stroll Through Life
Wednesday   Raising Homemakers        Savvy Southern Style         Adorned From Above
The Thrifty Home   A Wise Woman Builds Her Home
Thursday    Between Naps on the Porch   Serving Joyfully     Lamberts Lately
Friday      Rooted in Thyme  The Thrifty Groove   Farm Blog Hop  Best of the Nest
French Country Cottage  The Girl Creative
Sunday    Nifty Thrifty Things    Suburbsmama    Sew Many Ways
Posted by Angela ~ Call Her Blessed at 6:11 AM 2 comments: