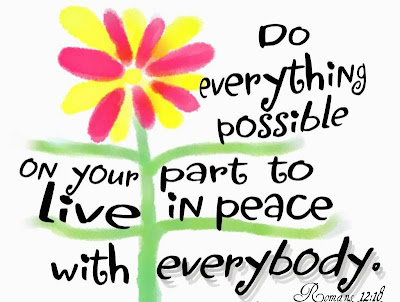 You want to know how NOT to find fault with other folks?
Stop looking for it!
Want to know how NOT to be bothered by decisions other people make,
especially when they are of NO consequence to you?
Stop worrying obsessing about what people do or why they do it ...
whether they should do it ... or how they think they can do it ...
& well, to put it bluntly, just worry about keeping your own affairs in order.
The dictionary defines criticism as “an act of criticizing;
to judge as a critic; to find fault; to blame or condemn.”
A “critical spirit,” is an obsessive attitude of criticism and fault-finding,
always seeking to tear others down.
This type of person camps out in all things negative,
always eyeing for the flaws rather than the good.
They are always complaining, always upset, and always have a problem
or a complaint about someone or something.
They often have little control over their tongue or their temper,
and they reign supreme in gossiping and slander
{which Paul said were sins “worthy of death”}.
Sometimes we often see their destructive spirit masquerading as
"I am only telling you this so you can pray about it ...
or I just thought you ought to know."
Some even think they are doing others a favor by pointing out the faults & flaws.
Think about it ... a meal, perfectly cooked & beautifully presented.
The only problem, too much salt.
What's the first thing that's stated?
This is good, BUT it has too much salt!
You may have spent all day painting the fence ... a really loonng fence,
but leave a little square unpainted & it'll be the first thing noticed & pointed out.
You did a good job, BUT ...

Fault-finding & criticizing is oh so easy to do ...
but, no matter what the intention, it tends to drive a wedge between us & other people.
It's hard to live in peace with everybody when you have a critical spirit.
Nothing is easier than finding fault & Paul knew this would be a problematic area.

He knew Christians would be prone to falling into the 'fault-finding' trap
when he penned this in Romans 14: 10-12:
"Why do you pass judgment on your brother?
Or you, why do you despise your brother?
For we will all stand before the judgment seat of God;
or it is written, as I live, says the Lord, every knee shall bow to me,
and every tongue shall confess to God.
So then each of us will give an account of himself to God.
Therefore let us not pass judgment on one another any longer,
but rather decide never to put a stumbling block or hindrance in the way of a brother."
Tearing down fellow brothers & sisters by finding fault, judging, & criticizing

can pose a serious stumbling-block and cause irreparable damage to their faith.
Furthermore, you start the gossip train a'rolling & believe me, it will pick up
momentum faster than you can ever imagine.
What if you destroy the influence someone could have had on a non-believer
somewhere down the road?
We've become very skilled in recognizing the faults of others,
all the while ignoring their many good qualities.
"I believe she's a good person & she loves the Lord, BUT
I don't know how she thinks it's ok to do this or that ..."
"Yes, she's faithful to the Lord, BUT ..."
We devote a great deal of mental energy being bothered by the 'faults' of others ...
often listing them, analyzing them, even meditating on them!

But the bottom line is this:
We are all never going to see eye to eye.
Never.

I may feel strongly about homeschooling my children, choosing to spend my years
at home tending to the needs of my husband & children.
I may feel like there are plenttty of scriptures to back that up.
I may feel like there are no two ways about it.
I may not {& do not}, however, look down my nose or put on my 'critical spirit'
toward all my friends, family, & acquaintances who do not share in my strong beliefs
in this area.

I may have strong opinions about music, choosing to steer away from secular.
I may feel like using the internet or watching a television is alright.
I may not have a problem with open-toe shoes or short sleeves.
I may let my sons play a video game, where as others may not.


While I may not be a Democrat, a German Baptist, or an Amish,
I'm certainly not going to make it my life's mission to obsess about how they believe,
why they believe, what they do, or what they don't do, constantly finding fault.

I'm also not going to think for one minute that I am above them or can't learn
anything from them.


I've heard the Baptists bashed mercilessly ... their belief system labeled as
'from the pits of hell'.
Those same folks, however, will tell you how much they love the Duggar Family
{who are Baptists} & clearly see the light of the Lord shining from their lives.
There's nothing coming from the Duggar other than the Lord being lifted up
for all the world to see!

People will shun folks from their own denomination for not 'looking' the right way,
but will support authors, singers, & preachers who'd never be invited on the pulpits
of their church based on how they look.

What a double standard.

The bottom line is this:
There will be differences of opinion on many issues in life, spiritual & non-spiritual alike.
And here's the liberating part ... it's ok!!
We don't have to see eye to eye on everything, & believe it or not,
we can still be friends, family, & fellow believers!
We can still speak to one another!
We can even still be friends on Facebook!
There are countless non-essential matters like worship styles, schooling choices,
political affiliation, denomination, pre-trib, post-trib, etc ...
& it's ok to have varying opinions on these things.
Yet far too many Christians use these non-essential differences to feed
their fault-finding frenzy.
It seems to be a measuring stick used to gauge one's spirituality.
Here's where we seem to be missing it.

Whether you believe one way or the other on these non-essential issues,
it does not affect salvation.
That is the one area where there is no room for variance.

When it comes to the issue of salvation,
there should be no difference of opinion.
We, as Christians, must seek to be set free from all this fault-finding!
We must seek to conquer the critical spirit!
If we ever hope to bring improvement in others,
we must learn to build up instead of tearing down.
Our actions, attitudes and words must be devoted to encouraging the spiritual
progress of our fellow brothers & sisters.
1 Thess. 5:11 says to "...encourage one another and build one another up,
just as you are doing."
If you are not doing it, start now!
Identify what is motivating the destructive behavior & pray for God to take it
out of your life for good!
Common contributors are bitterness, negativeness, unhappiness, discontentedness, unconfessed sin, unforgiveness, insecurity, jealousy, & spiritual immaturity.
Look in the mirror.
Stop trying to line everyone else out & concentrate on fixing yourself.
Instead of looking for faults in others,
look for your own faults & work on getting rid of them!
Eph. 4:29 says,  "Let no corrupting talk come out of your mouths,
but only such as is good for building up, as fits the occasion, that it may give grace
to those who hear."
And remember this, the Bible doesn’t promise peace to those
who dwell on the faults of others!
It says that the Lord will keep them in perfect peace,
whose minds are stayed on Him! {Isaiah 26:3}.
**Make no mistake ...
I'm not saying there's never an occasion to find 'fault' or make judgements.
Life requires both.
However, the type of critical spirit as portrayed in this blog is NOT an acceptable
way of life for a Christian!
Posted by Angela ~ Call Her Blessed at 10:44 AM