During the summer months, thanks to fresh garden produce,
there are some sides that show up on our supper table every night.
And we are not complaining.

This only happens from about June to September while the garden food is plentiful.
I could put a sliced tomato on our supper table every night,
but the taste of home-grown garden food kind of spoils me.
It just can't be replicated.
No matter how hard it tries, a store-bought tomato just doesn't have the same flavor
as a ripe one picked straight from the vine.

That being said, fresh sliced garden tomatoes top the list of the things you'll find
on our summer supper table. 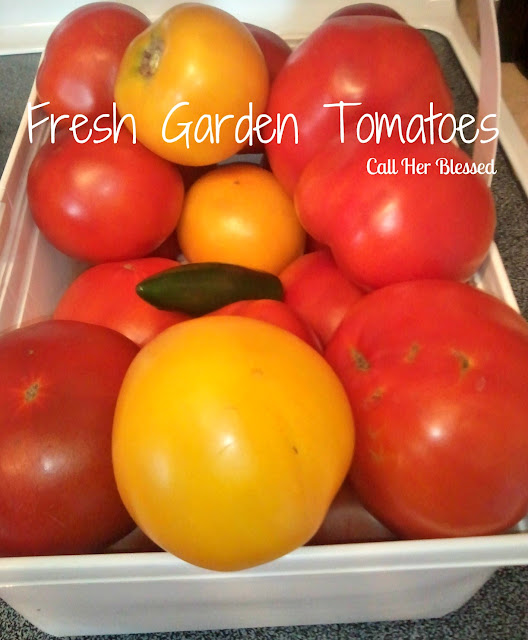 These beautiful tomatoes were from my dad's garden last year
& soon hopefully, we'll have some more.
I especially love the yellow ones.
{See that lone jalapeno pepper?}

Another summer side on our table each night is green onions.
Raw, whole green onions ... & we like to eat the whole thing, from tip to tip.
Here is what's left of the second batch from Garrett's garden. 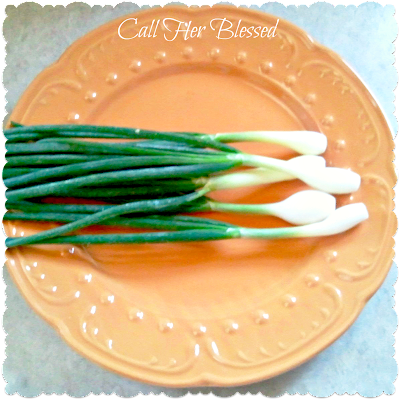 I wash & trim them ... then store them in a gallon-sized ziplock bag in the fridge.
I do serve onions quite often, all year long, but when the fresh garden green onions
are gone, I serve slices or quarters of yellow, white, or Vidalia.
I'm sure it's a southern thing & I'm just continuing the tradition.

And for the third summer treat, that would be cucumbers.
I peel them, slice 'em up, & serve them with the tomatoes & green onions.

Often, I have a cucumber for lunch, along with cottage cheese & a slice of tomato.
Mom would sometimes mix a teaspoon of Miracle Whip into a cup {or so}
of cottage cheese, & stir in largely diced cucumber.
Sprinkle with salt & pepper, serve on a large leaf of lettuce, & you've got lunch!
Try it ... it's delicious.

I do buy these same items from the store, for salads, sandwiches, recipes, etc,
but not to just eat plain, as an daily accompaniment to our meals.

James & I both grew up having a garden & we've always had one,
at every home we've owned until this one ... & all of us greatly miss it.
So, when Garrett was offered an opportunity this year to plant his first garden,
he jumped on the chance.
A church not far from us has a large field divided up between several families.
There was a small space left over & he gladly took it.
It's been a tough year for it though, weather wise.
We've had record-breaking temperatures & NO rain ... a very odd June, indeed.
There's been plenty of extra watering, but it's paying off.


Here's Garrett's garden, taken several weeks ago.
I'll have to snap some new ones to show the progress.

His papaw gave his some stakes to use & he's got it looking good. 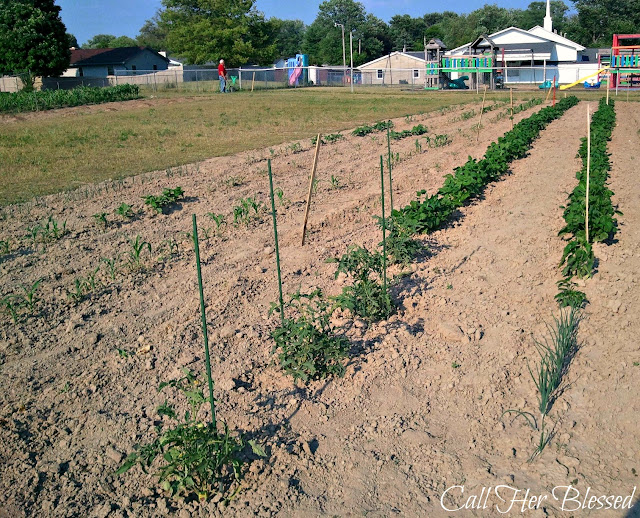 There's just something about growing your own food in a garden.
Something simple, but beautiful & rewarding.
I think this quote sums it up:

Everything that slows us down and forces patience,
everything that sets us back into the slow circles of nature, is a help.
Gardening is an instrument of grace.
~May Sarton