A Jack Hammer in my Living Room?!

They are jack-hammering a hole in my living room floor.
Really?!
Really?!

Is there ever an instance that the words jack hammer & living room
should ever share the same sentence?!
I think not.

Here is a quick run down of last Thursday & Friday's events:

Gunnar, leaving for work at 5a on Thursday, comes to wake up his dad & me -- bearer of bad news.
"Dad, wake up ... there's water all in the garage floor."

Ugg.
What a wake-up call.
I got up with James & immediately told him of a weird occurrence around midnight
right before I came to bed.
I had been sitting on the coach, up a bit too late, & in the quiet of my living room,
heard a pretty loud 'GURGLE' from behind me {front corner of our house}.
I explained to him that it sounded like one of those upside down water jugs that when you lift the lever
to get water, it gurgles as the water comes down.
It really startled me & I immediately jerked around to see what in the world was making that noise.
I got up ... looked out the window, figuring something outside had surely made the noise ...
only to find nothing.
Absolutely no explanation for the noise I know I heard!

We go into the garage to find water streaming down both exterior sides, but no immediate sign
as to where it's coming from.
We came back into the house, walk over the whole lower level to see if there's anything wet inside...
and thankfully, nothing was ... so we thought.

Now, you have to know, if you don't already, that we've experienced a major water issue before.
A few years ago, after being gone for 4 days to a conference, we came home to find our whole
lower level completely flooded with water.
Our water heater had gone bad.
It was a huge ordeal, but ended up being a blessing in the end.
We got all new flooring & trim, but had to deal with an unexpected upside down house for many weeks.

So ... clearly, we were concerned at the sight of water where it was not supposed to be.
Been there.  Done that.  Bought the T-shirt.

A few hours later, our friend, Jake the Plumber shows up to work his magic.
He initially thinks it's a leak NOT outside, no ... but right in the corner of my living room. 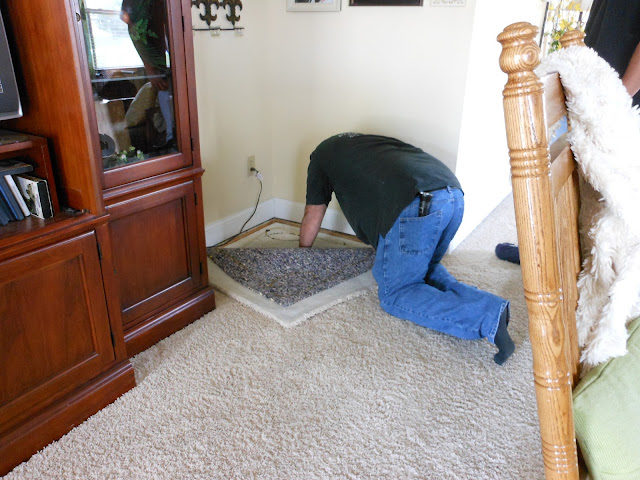 So, they begin preparing to fix the leak.
They posed for this 'promo' shot ;)
Jake, his son, & his apprentice ... super guys.
We could not have asked for a better crew.
{If you have plumbing needs, call Jake ... a very reputable christian man/company.} 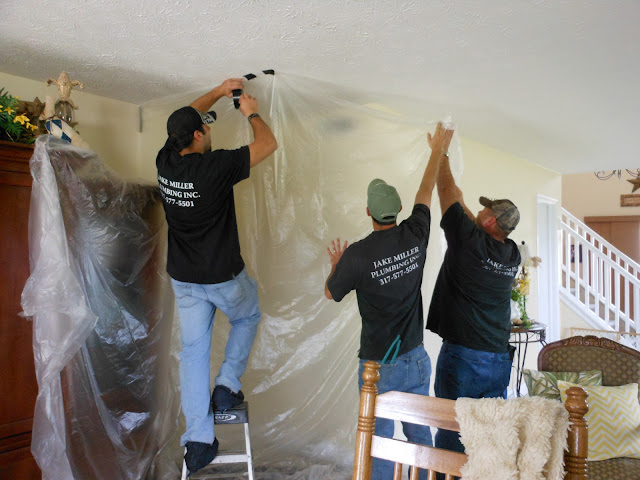 Here is where the jack-hammer came into play.
Unfortunately, we are on a slab!  Boo!
Don't recommend it to anyone.
After making a little plastic room to contain all the dust, they started tearing up the concrete.
This is hole number #1  - a small exploratory hole to to begin trying to figure out the source of the leak. 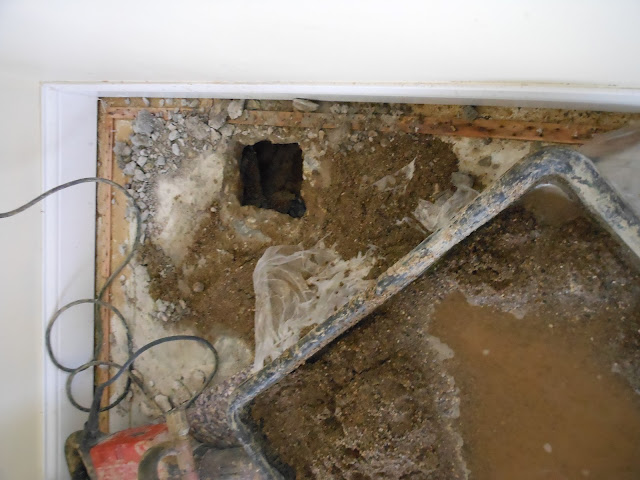 It was filling up with water & sand as fast as he could empty it out. 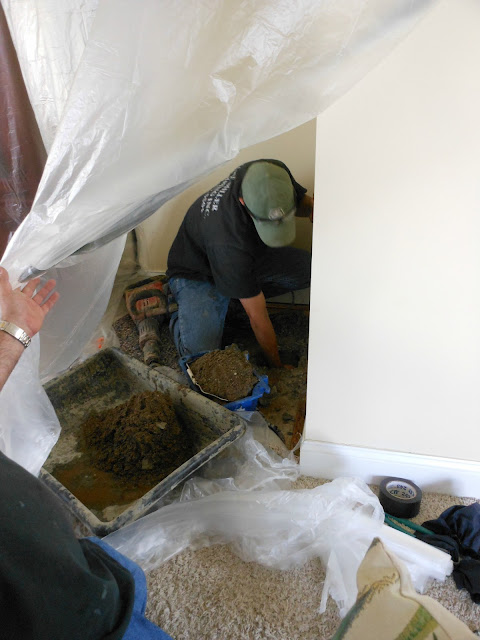 Tray after tray of this water carried out of the house. 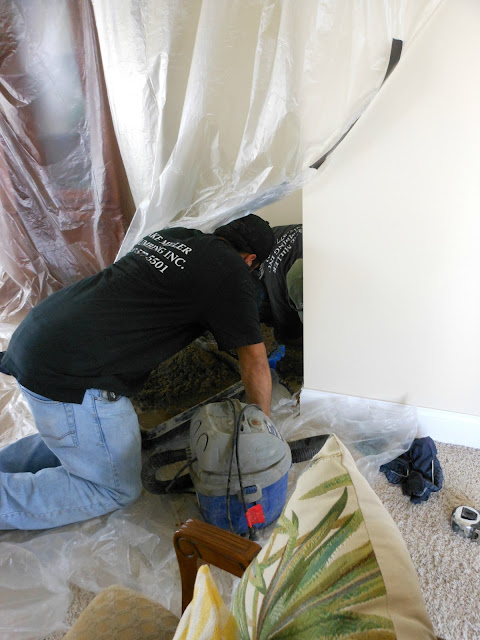 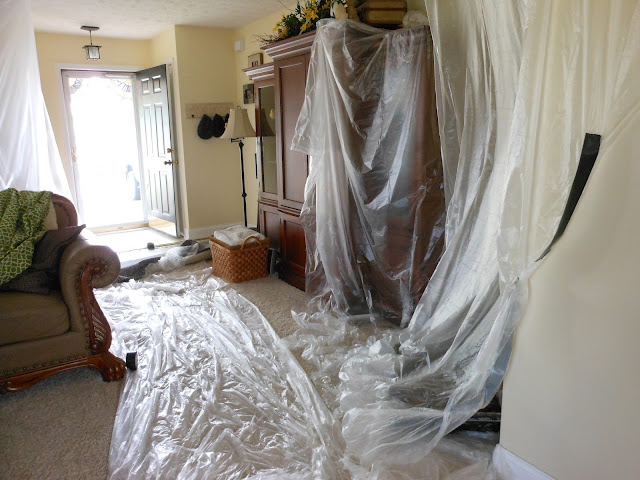 Unfortunately, that was not the source of the leak.
So, they moved on to the next area ... the front corner, exactly where I heard the gurgle sound!
{Jake said I undoubtedly heard the slab 'burping'} 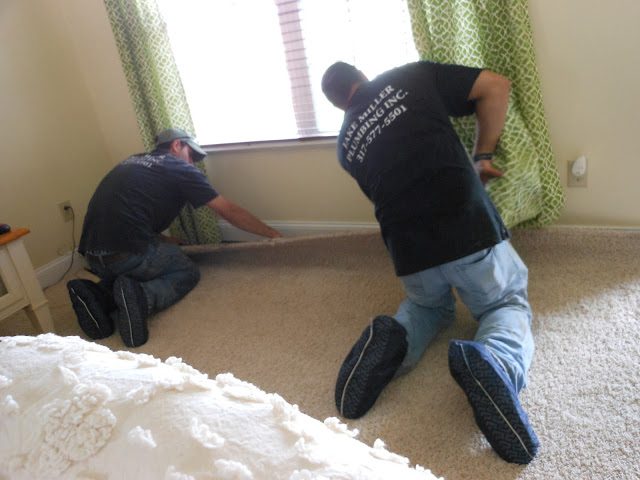 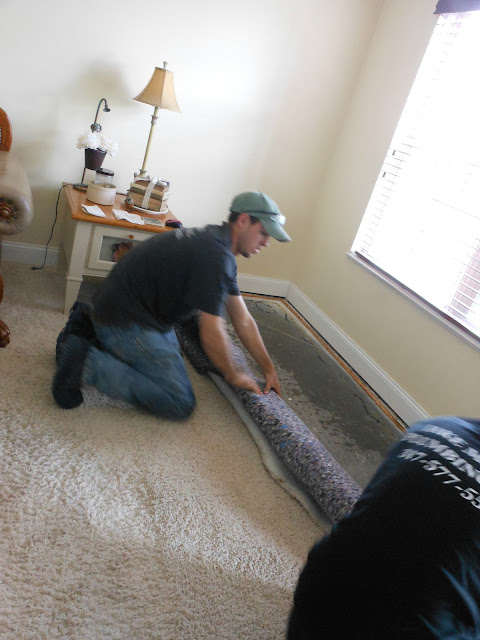 After rolling back the carpet & building another little plastic room, they began searching here.
The leak was being quite difficult to locate under the concrete floor. 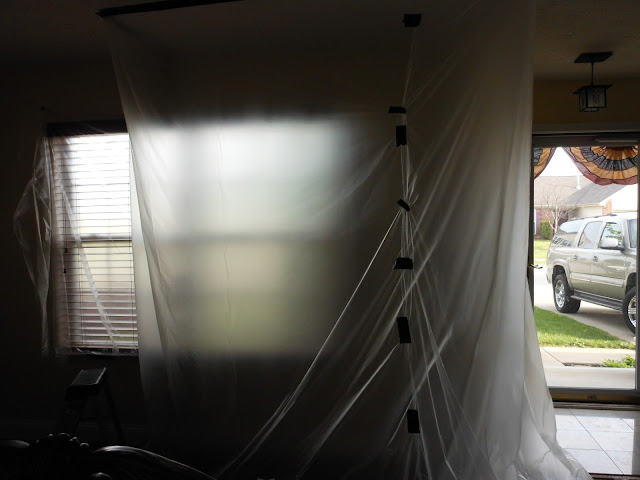 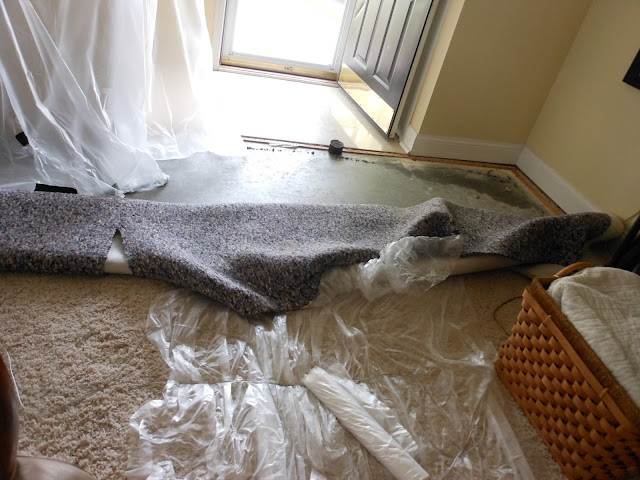 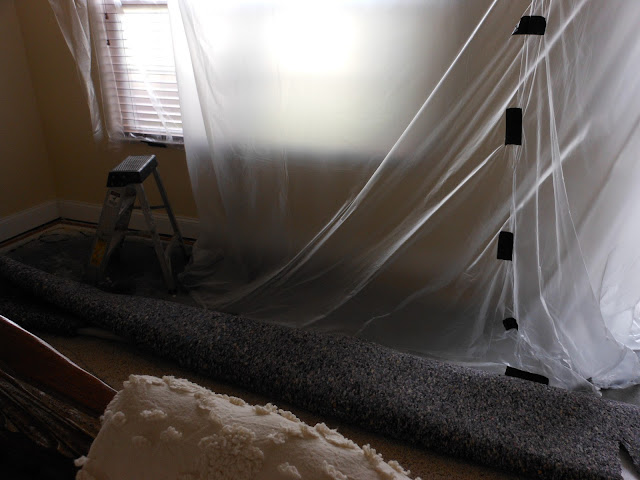 This resulted in hole #2
As you can see, it was quite larger than the first hole. 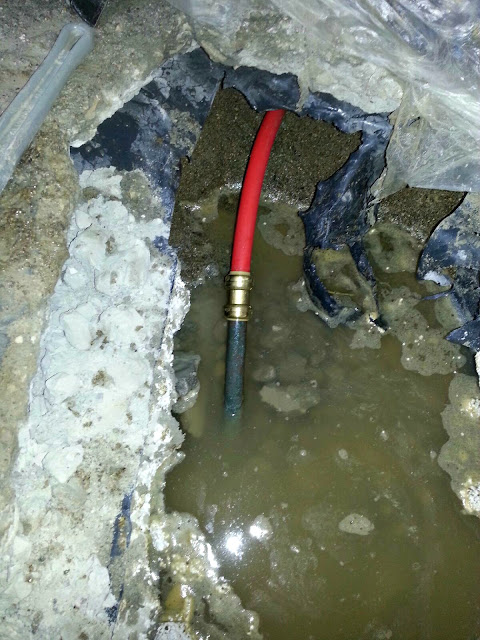 There was even some outside digging in attempt to locate the mysterious leak. 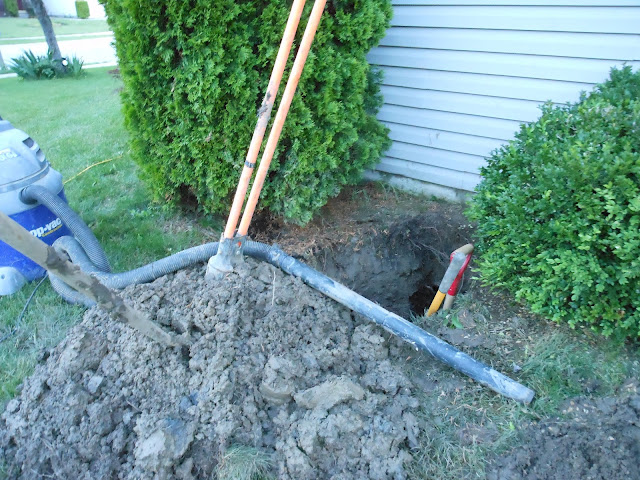 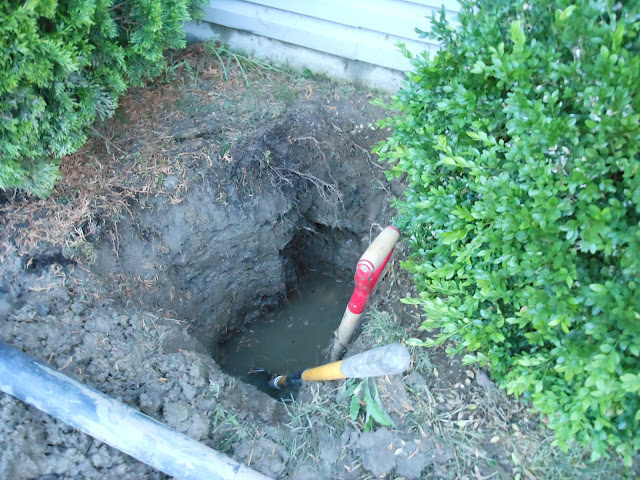 Unfortunately, no deal.
After working from 1p - 9p, they quit for the night, exhausted but vowing to conquer it the next morning.
So, we went to bed with a living room looking like this: 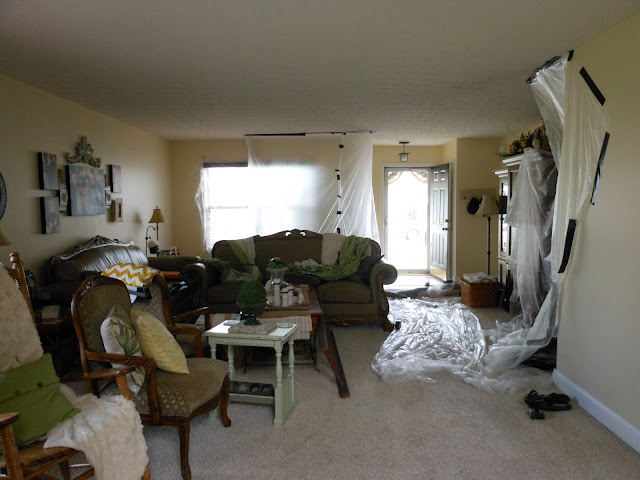 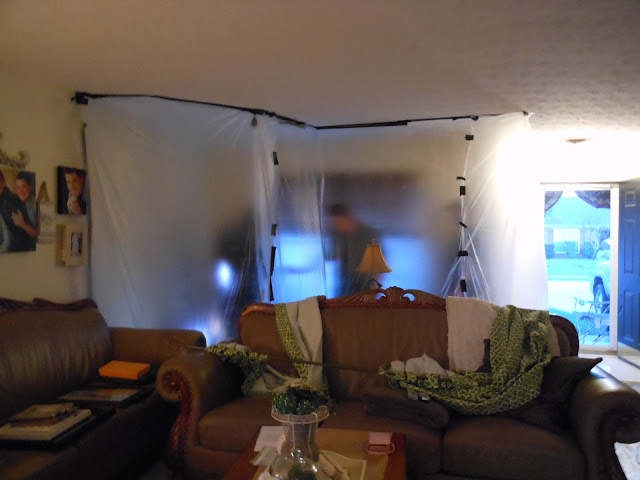 There were 2 things about this whole ordeal that struck me *funny*  ...
one was that just 2 weeks prior, I had my living room carpet professionally cleaned.
Seriously.
Here's a pic of the living room right after the carpets where shampooed.
Far cry from what would be taking place in this very room two weeks later =( 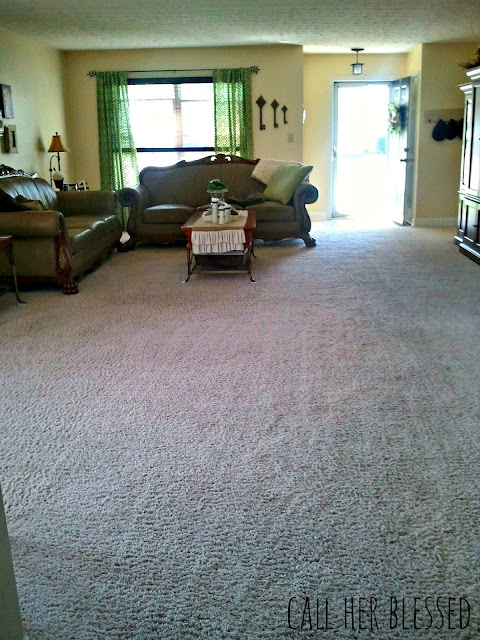 Looks so big & spacious without all the furniture.
Here it is with everything back in place.
I was so happy to have it all done ... so I thought. 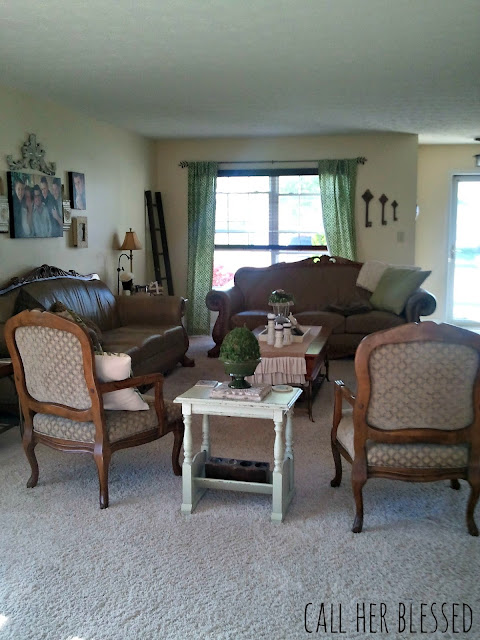 And the other *funny* thing is that this happened on Thursday morning & on Friday,
we were set to attend the IAHE Homeschool Convention for 2 full days of events.
Not the greatest timing, to say the least.
My mind was no where near it with all this havoc taking place in our home.
But, James insisted we go on to the convention & let Jake & his crew come work the next day,
doing what they do best.
We trusted them in our home & to complete the job.
And that's exactly what they did.
The illusive leak was located in the center of our living room floor!

Thankfully, they did not have to tunnel through the concrete all the way across the room.
They were able to run a flexi-pipe {please forgive me for lack of plumber-speak} & fix the leak.
They poured concrete to patch the holes & we were good as new.

Yesterday, I had the carpet guys back out to re-clean the carpet & I think ...
I think we are back to normal ... whatever normal is ;)