We were more than ok with going to Chick-fil-a yesterday!
It was a no-brainer.
It is, after all, one of our very favorite places for a yummy chicken sandwich & nuggets.
And milkshakes ... can't forget those milkshakes. 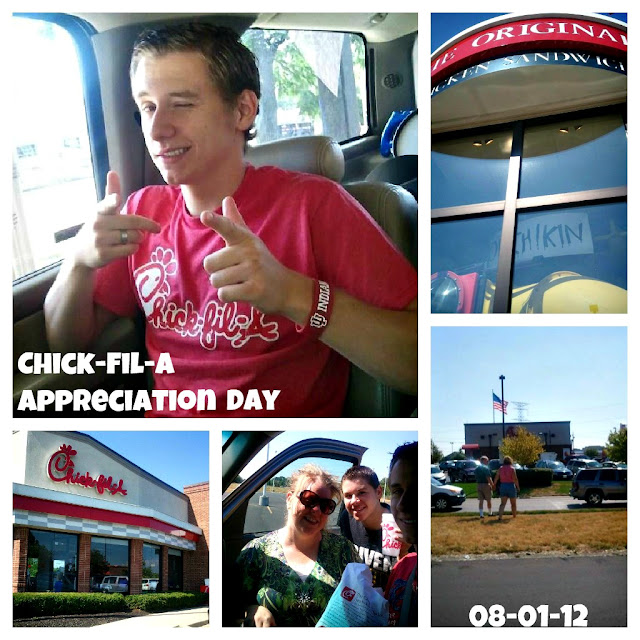 Greater than that, Chick-fil-a is a Christian company ... & we are a Christian family,
so, obviously we identify with that.
We love that they are closed on Sunday for their employees to observe the Lord's Day.
And Monday through Friday, they play Christian music in their lobby, another thing that we appreciate.
On top of all this, the customer service is second to none!
Never, not one time, have we ever had a rude waiter.
It is consistent ... they are always sweet, kind, & courteous.

We wanted to show how thankful we were that Mr. Cathy had the courage to voice his opinion,
especially during a time that conservatism is highly unpopular...
And what a firestorm has come from Mr. Cathy's opinion!
I can't begin to imagine what this past week has been like for not only the Cathy family,
but for the individual store owners, the employees, & even the customers.
Just on Facebook, I've seen harsh & hurtful words spoken ... & what's very disheartening,
some of those have some from professing Christians!
This is not a time to nit-pick or split hairs, rather the time to stand together for a worthy cause!

That's exactly what we observed yesterday as we waited in the drive-thru line.
Everyone was smiling & even from our vehicle, we could sense the buzz of excitement.
I got that same feeling that I get when I watch a 4th of July parade ... people from all walks of life
coming together for a mutual cause, one bigger than themselves.
Many were taking pictures of this historic event, happy to be a part of it.

The overwhelming thought I took away was this:
As conservatives, we are so often made to feel that we are the underdogs, part of minority,
unable to make a difference in anything because we are old-fashioned & outnumbered.
Yesterday, all across the nation, thousands of folks came out, showed up...
& if nothing but by that act itself, made a statement on what they value, what they hold dear.
Did it send a message ... oh yes, it sent a message!
I'd say it was a morale booster for all of us conservatives!

My prayer is that it continues...right into November & on!
I hope this was gasoline in all our moral & political tanks to keep showing up, keep standing up
for conservative & Biblical values!
We don't have to be mean ... we don't have to be ugly ... we just need to stand.
Stand for the truth.


Wherefore take unto you the whole armour of God, that ye may be able to withstand in the evil day,
and having done all, to STAND.
~Ephesians 6:13