Pumpkins in the Oven

OK...So I am uber excited about this new discovery!!

Back in September, I began going through my recipe books, pulling out all my recipes that called for pumpkin.
Ya know, it's fall & pumpkin seems to be the ingredient of choice.
I baked the usual suspects ... pumpkin roll {my husband's favorite}, pumpkin pie {my husband's other favorite}, iced pumpkin cookies {I shared that recipe on this blog - look it up}, pumpkin bread & pumpkin bars.
I received an email from someone asking for my pumpkin bar recipe, so I shared it.
She was surprised to see Miracle Whip as one of the ingredients, so I decided to google pumpkin bar recipes to see what the usual ingredients were.
And it was on that search that I discovered that ... pumpkins can be baked in the oven ... WHOLE!

I decided then & there that the pumpkins gracing my porch as fall decor would be in my oven come December ... January.
So, I brought the pumpkins into the garage & there they stayed until last week.

After bringing them in the house, I wiped them off w/a damp towel
& popped them in the oven ... & it worked!!!!
You have sooo got to try this!

Here's the process:
Pop the small-medium pumpkins in the oven on 400 degrees for 1 hour.
{If they are larger like mine were, bake an extra half hour.} 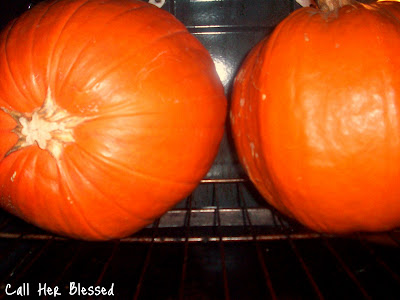 After cool enough to touch, remove skin .... it just peels right away! 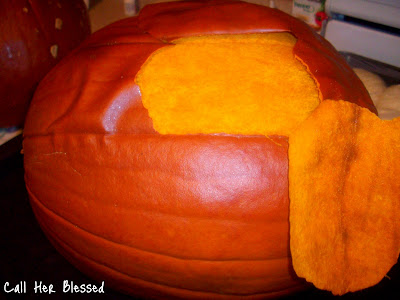 Slice pumpkin in half, remove seeds, chop into manageable pieces & puree in your blender/processor.
Remove any 'stringy' pieces that not have processed thoroughly. 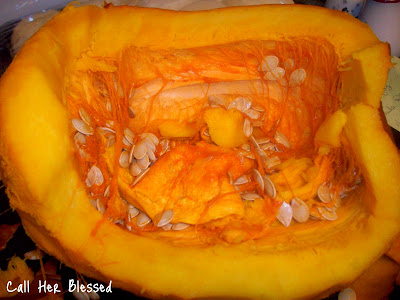 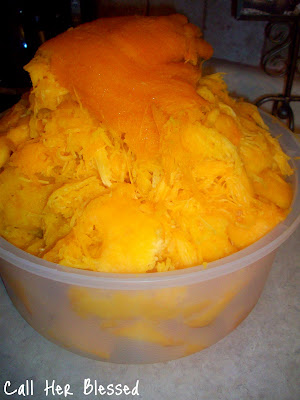 Can't get any easier than that!
Store in the freezer in bags or plastic containers until ready for use. 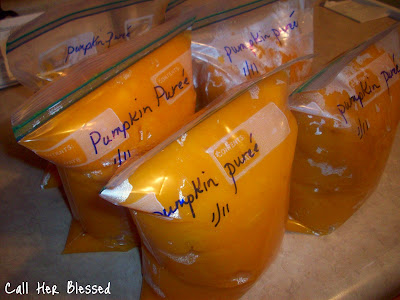 This makes me incredibly happy!
I always felt wasteful throwing away my pumpkins!
Back when I was newly married, I tried to make a pumpkin pie from scratch ... using a 'pie' pumpkin.
After peeling, cubing, & cooking, I discovered it tasted awful & I threw it out!
More than likely, I just had a bad pumpkin, but it was enough to﻿ cause me to stick w/ canned pumpkin from then on.
Well, canned pumpkin no more!
'They' say the difference between canned & fresh is incredible ... can't wait to find out!

Stay tuned for PUMPKIN BUTTER ... made from these very pumpkins!